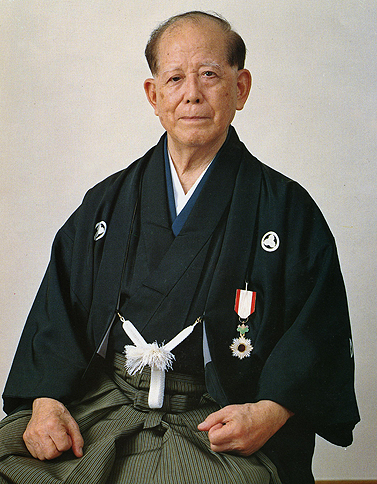 
"Even though my Sensei died in 1997, he is still teaching me."
-- Hanshi Frank Grant on Grand Master Nagamine

This page is a brief introduction in to the life of Grand Master Nagamine. For a complete and thorough understanding of this great man, it is recommended that you read his two books. The following paragraphs are only a small tribute to his contribution to our lives and to the wealth of the world.

Shoshin Nagamine was born on July 15, 1907 in Tomari Village in Okinawa. In his youth, he was not a healthy child. By the time he was a teenager, he had developed a digestive disorder and doctors seemed unable to find a cure. The young Nagamine decided he would treat his illness himself with dieting and karate training. His first teacher was a neighbor, Chojin Kuba. As his health progressed, so too, did his karate skill. When he was nineteen, Nagamine joined a school in Shuri with Sensei Taro Shimabuku. Later, this teacher encouraged Nagamine to train with Ankichi Arakaki. Arakaki's teaching was so influential that both Nagamine and his teacher, Shimabuku, began training with him. No longer was Nagamine sickly, instead, he became a robust individual. His health had increased so much, and his body became so chiseled with muscle that his friends nicknamed him "Tenacious Pine Tree" (chippaii matsu).

After being honorably discharged from the Japanese Army, Nagamine became a police officer in 1931. He was stationed in Kadena, Okinawa and later began training with Master Chotoku Kyan. In 1936, Nagamine was sent to Tokyo for special training at the Metropolitan Police Academy where the legendary Master Choki Motobu taught him. Master Motobu was one of the world's greatest fighters and it is from his teachings that Grand Master Nagamine developed our Yakusoku Kumite forms.

In 1940, when he was 35 years old, Nagamine obtained his instructors license for teaching karate-do. This occurred in the city of Kyoto on the mainland of Japan. Kyoto is revered as a spiritual site and many temples are located there. Nagamine received the title of Renshi (certified instructor) and passed his San Dan test in the art of Kendo.

In 1947, out of respect to his teachers Master Motobu and Master Kyan, and their teachers, Sokon Matsumura of Shuri and Kosaku Matsumura of Tomari, Nagamine decided to name his system "Matsubayashi-Ryu" which means “young pine forest.” According to Grand Master Nagamine, "Many students are often confused because the terms Shorin-Ryu and Matsubayashi-Ryu are used interchangeably. The fact is, both terms are correct, since there can be a reading of kanji (characters) taken from the Japanese language, thus the character meaning pine tree can be read as matsu or as sho, and the reading of forest can be either hayashi or bayashi or rin." Normally, Grand Master Nagamine's style is referred to as Shorin-Ryu. When a definite distinction is desired between this style and other styles of the Shorin family, then it is called Matsubayashi-Ryu.

In 1953, he built his dojo in Naha and named it Kodokan Karate-do and Kobujutsu Dojo. Four years later, an American serviceman named James Wax would enter this dojo and in 1959, bring Matsubayashi-Ryu to Dayton, Ohio and a tenacious student, Frank Grant.

We refer to him now with the title of O'Sensei, or Great Teacher as he has passed from us physically on November 2, 1997. In every WSKF dojo and student, his spirit lives through the system of karate he handed down to us through Hanshi Frank Grant. Hanshi was meticulous in making sure that we perform his Sensei's art correctly, just as his master taught him.