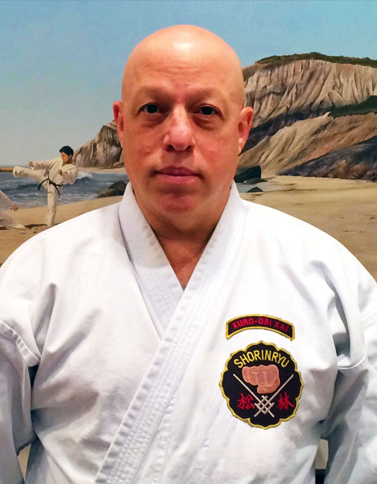 Kyoshi Peter Cronig began training in Shorin-Ryu Matsubayashi-Ryu Karate on January 18, 1974 at the age of 15 under Sensei Richard Curwell on the Island of Martha’s Vineyard. In 1970 the Vineyard Dojo became N.A.S.K.A. (The North Atlantic Shorin Ryu Karate Association). The Dojo has the distinction of being the first satellite dojo under Hanshi Frank Grant. Before there was a Man of the Mountain event or the W.S.K.F. Internationals, Hanshi Grant and many of his Senior Students would spend a week each summer on the Vineyard to teach and hold promotions. Over the years, the dojo has changed buildings and locations from the town of Gay Head to Vineyard Haven. During that time, the dojo has had three instructors Sensei Richard Curwell in 1970, Sensei Tod Bassett in 1977 and as of the year 2000, Kyoshi Cronig. In October of 1984, Peter and six of Hanshi’s Senior Black Belts, including Hanshi Jack McPeek, traveled to Okinawa and had the honor and privilege of training under Grand Master Shoshin Nagamine at his dojo in the City of Naha for three weeks, an unforgettable once in a lifetime experience. Peter currently holds the rank of Hachii Dan. His favorite Kata is Chinto.