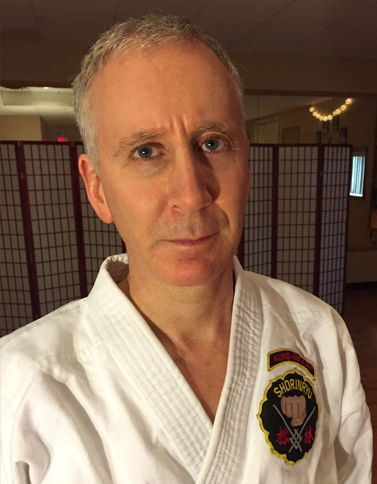 Kyoshi Jeff Bentle began training in Maysubayashi-ryu in 1989 under Kyoshi Dale Pike. On Saturday mornings, Kyoshi Pike would take him to train with Hanshi Tommie Harris at Hanshi's old dojo on State Route 201 in Tipp City. Not quite two years later, Bentle moved out of town. When he returned five years later, he continued his training under Sensei Greg Johnston, who now owned the Tipp City dojo. Kyoshi Bentle now holds the rank of Shichi Dan and was a student of Hanshi Grant's for over a decade. He also holds a Sho Dan in kobudo under Hanshi Devorah Dometrich. In 2007, the WSKF issued a charter for Jeff to open a dojo in the Cincinnati area. He began the Tonbo Martial Arts Academy and started teaching in Bright, Indiana. The dojo now has a more permanent home in the Harrison Bowling Center in Harrison, Ohio. Kyoshi Bentle's varied background uniquely qualifies him to be the WSKF Special Projects Consultant. He contributes to projects within the organization by providing artistic and technical support, assistance and direction. He holds a Bachelor of Fine Arts and is an accomplished actor, writer, musician and certified yoga instructor. His favorite kata is Chinto.