Welcome to the official site of the World Shorin-Ryu Karate-Do Federation!

Hanshi Frank Grant studied directly under Grand Master Shoshin Nagamine and became a great influence of Okinawan Karate-Do worldwide. Hanshi Grant established the WSKF in 1970 with the support of O'Sensei Shoshin Nagamine and currently holds the position of Chairman of the Board. He has spent many years in the Dayton, Ohio area and has produced hundreds of Black Belts who in turn produced many dojos. The WSKF is currently headquartered in Piqua, Ohio where Hanshi Grant has his dojo.

It is with great sorrow we announce the death of Hanshi Frank Grant. Hanshi Grant passed away peacefully late night December 26, 2019. In his final evening he was surrounded and visited by his family and many loved ones. Following his wishes in place of a funeral, a celebration of life service will be held late January. Details with date, time and location will be posted soon. Hanshi Grant was a compassionate and positive force touching many lives of many generations and he will be greatly missed. Please keep him, his family and many loved ones in your thoughts and prayers.

WSKF Board of Directors

Our mission is to promote excellence in Matsubayashi-Ryu Karate-Do by providing resources for all WSKF schools, members and supporters so that they may achieve their goals and ambitions through the teachings of Hanshi Frank Grant, as we foster the true art founded by Grand Master Shoshin Nagamine. 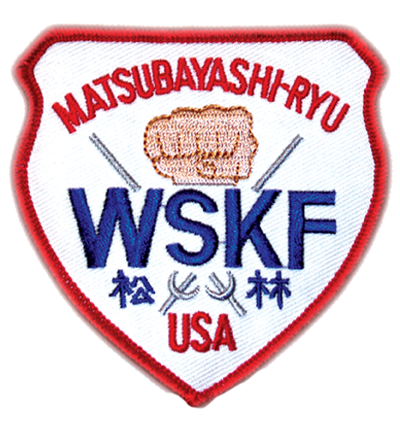 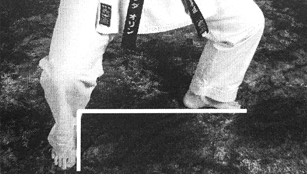 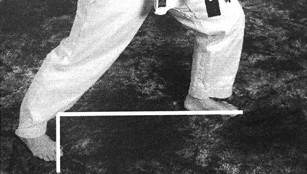 When snapping into Zenkutsu-Dachi from L-noji, pivot on the ball of the back foot while driving the heel back. The front knee and foot remain pointed at the attacker..

Step foward, keeping your center of gravity low and beneath you at all times. In this way, you maintain control and have the ability to retract your leg if necessary.

Remember to pivot on the ball of the foot, not the heel.

The weight distribution transitions from 50/50 percent in an L-noji to 70 percent on the front leg.

--excerpt from the book
"My Promise to the Master"