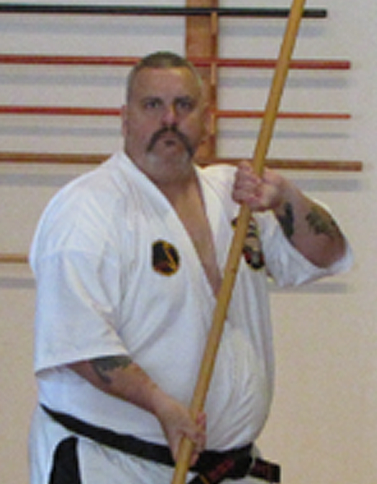 Kyoshi Dale Pike began his training in Matsubayashi-Ryu Karate-Do in January, 1982. His first year of study was in classes at the University of Dayton. The next year, he was invited to train at Sensei Hartley’s dojo in Kettering, Ohio during the winter break. When he arrived for his first class in a real dojo, he heard a thundering rhythm coming from the upstairs of the garage. This is when he met his sensei, Kyoshi Jack McPeek who was working out on the makiwara before class started. Throughout the next two decades, he would train under Hanshi Grant, Hanshi McPeek and Hanshi Harris. Kyoshi Pike has continued his training extensively under Hanshi Grant and the Kyoshi of the WSKF. He holds the office of Educational Director. He opened a dojo in Ohio and offers classes in Karate-do, Bo-jutsu, and Tai Chi Chuan. He currently holds the rank of Hachi Dan. His favorite kata is Ananku.