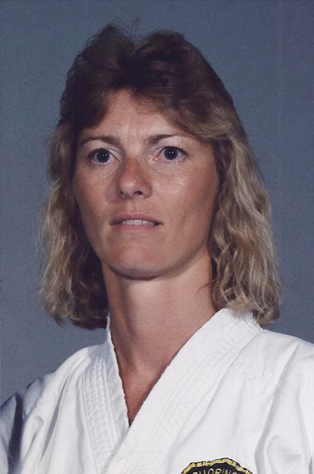 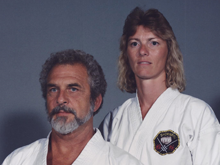 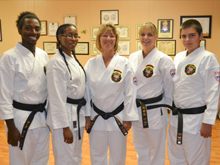 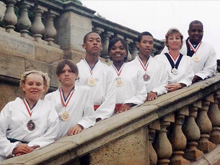 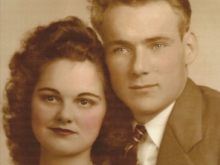 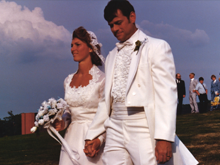 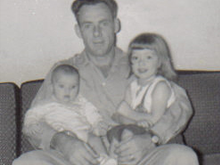 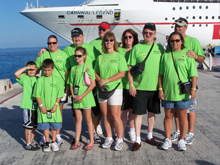 Glenda had no idea when she began training with Hanshi Frank Grant in 1975, that 40 years later she would be the strong, independent, force of nature she has become. Under the masterful hand of Hanshi Frank Grant, Glenda has become an influential WSKF leader. Glenda gives credit to Hanshi Grant for his constant direction and motivation, as well as recognizes that her cumulative body of work and accomplishments are linked to her early beginnings with Hanshi and her Matsubayashi-Ryu training.

Glenda has been a dedicated, loyal student of martial arts for over 40 years. She is the kind of person who strives to do the right thing, sometimes at great personal sacrifice. She is dedicated to her family, friends, PAC students and families. Her dedication and volunteer spirit carry through to everything she does and is truly demonstrated by her commitment and loyalty to the WSKF family.

From an early age, Kyoshi Olin was athletic. Before she started kindergarten, you could see her running up and down the sidewalk in front of her home so fast, quoted her father and mother on many occasions, that her heels would hit her backside. She ran everywhere, never walked. In grade school she participated in sports and in high school she was a volleyball champion. Glenda's parents played an important part in shaping her life by encouraging her and supporting her decisions.

Kyoshi Olin began her training in the Martial Arts in 1972 with Mr. Kim's Tae Kwon Do club. After three years of training in Tae Kwon Do and receiving a first-degree black belt, Glenda switched to Matsubayashi-Ryu under the guidance of Hanshi Frank Grant and began her training in the dojo on Troy Street in Dayton, Ohio while training along side the likes of Kyoshi Tommie Harris, Kyoshi Jack McPeek and Sensei Lori McPeek. Kyoshi Harris describes Glenda as possessing “Boundless dedication, the effort and will of a champion, compassion and humility of a saint, the hunger for knowledge needed by all karate-do students, selfless giving, a living example of the perfect student becoming the Master; A.K.A. Kyoshi Olin.” Unbeknownst to Glenda, she would also be training along side her future husband, James Olin. Glenda and Jim celebrated their 30th wedding anniversary this year.

Starting as a white belt with Hanshi Grant in 1975, Glenda progressed to the rank of 1st Dan in Matsubayashi-Ryu on August 6, 1977. From the beginning, she has had a special bond with Hanshi Grant that began when they first met. Hanshi Grant recalls that Glenda Olin was an upstanding student. “When I first met Glenda, I told her that if she trained extremely hard, she would be able to test for Black Belt in one year. Glenda trained 7 days a week and never gave up. Her drive and commitment were incredible. The expectations for Glenda's promotion were set high and she exceeded what was expected of her. This promotion set the standards for all promotions for the next 25 years. I rely heavily upon Glenda and she has never let me down,” says Hanshi Grant. Glenda states, “If you have trained under Hanshi for any length of time, you know the importance Hanshi places on being a (total) karateist! One of the greatest complements Hanshi gave to me was (you are the strongest woman I know). I am strong both physically and mentally because of Hanshi's training.”

In October of 1991, Glenda and several other Matsubayashi-Ryu students from the U.S. (including Kyoshi Jeff Leistner and Tod Bassett) traveled to Okinawa, to attend the 85th birthday celebration of Grand Master Shoshin Nagamine, the founder of the Matsubayashi style of Shorin-Ryu. While in Okinawa, Glenda had the opportunity to attend classes taught by some of the highest ranking Shorin-Ryu martial arts Masters. On October 28, 1991, Grand Master Shoshin Nagamine promoted Glenda to the rank of 5th Dan in his dojo in Naha City, Okinawa. This promotion distinguished Glenda as the highest-ranking female in the world in Matsubayashi-Ryu and this still remains true today.

From 1996 to 2001, Kyoshi Olin taught the Montgomery County Sheriff's Office Police Athletic League (PAL) Karate program. During that time, the PAL students traveled throughout the United States attending tournaments and were recognized nationally and internationally for their achievements. The PAL mission, “Cops and Kids - Working Together for a Better Tomorrow.” She maintains lasting friendships with many of the PAL students and instructors.

In 2001, Kyoshi Olin founded Partners Against Crime (PAC), a non-profit organization funded by individual contributions and fundraising events. PAC's goal is to provide a safe supervised environment to assist boys and girls to become involved in organized activities such as Karate as an alternative to crime and drugs. These activities emphasize character development, mental conditioning, personal discipline and physical training. Her goal is to instill confidence in the karate students while teaching the traditional art passed on to her through Hanshi Frank Grant and Grand Master Shoshin Nagamine. Glenda believes strongly in the martial arts concepts of courtesy, discipline and respect and demonstrates these traditions in her daily life. The thorough knowledge of the art that she has mastered and the way she communicates with her students makes her an invaluable teacher (sensei) and a respected member of the WSKF.

Glenda is also known for her strong dedication and appreciation of the act of volunteerism. Very early on in life, her father introduced Glenda to volunteer work. Her work has been ceaseless through PAL (1996-2001), PAC (2001-current); WSKF Vice President (2004-current) and former WSKF Secretary (inception-2009).

Some of Glenda’s repertoire of recognition include: Dayton's own Hometown Hero for her work with children (2002); Top Pro-Trainer On-line Magazine (April 2002); Legion of Honor member through the Miami Valley Tournament Association (2009); The Smith Family Foundation Pelican Award for philanthropic solutions (2012). Glenda works around the clock to raise funds for PAC by working at fairs, sporting events and local venues. She is a wonderful organizer and motivator. The Smith Family Foundation honored Glenda for her commitment and sacrifice to the community. “Thank you, Sensei (Olin), for who you are and all that you do. You are a reminder to all of us that the secret of living is giving.”

Glenda's professional career included working in the Montgomery County Probation Department (alongside Hanshi Grant), Moore's Nautilus, and executive secretary to the Vice President at Lexis Nexis. She currently devotes herself full time to working with children and the continuance and preservation of Matsubayashi-Ryu. Glenda has one sister and brother-in- law, 2 nephews and 4 great nephews including Kyle currently a junior black belt training under Glenda, and an ever-growing fan club of admiring students and their families.

Over the past 40 years, Kyoshi Olin has continued to train and teach Matsubayashi-Ryu. Her passion and commitment to Matsubayashi-Ryu were awarded the rank of 8th Dan on August 1, 2009, and she continues to diligently serve in the role of WSKF Vice President. Glenda is an Exceptional Leader who embodies Integrity, sets her Training as the highest priority, and strives for the utmost Excellence in not only her technique but her character as well. In the true spirit of the BUDO HALL OF HONOR, Glenda lives life to the fullest in support of Hanshi Frank Grant and the WSKF. She is truly a legendary figure and is well deserving of recognition as a member of the BUDO HALL OF HONOR.