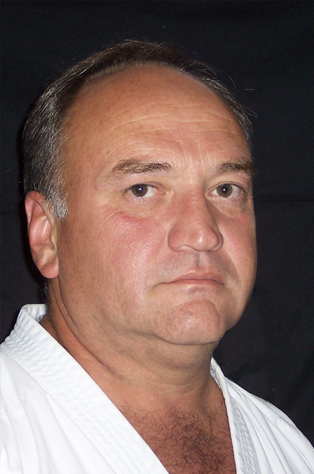 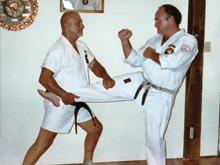 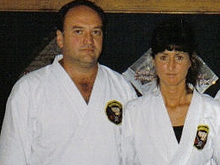 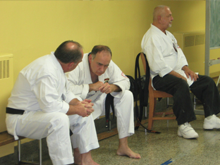 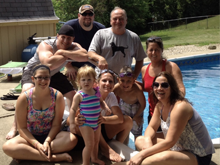 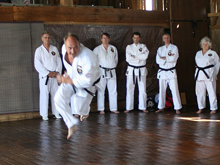 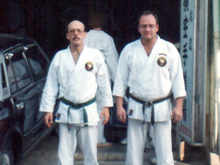 In 1974 when Jeff walked into the Greenville, Ohio dojo on that first day, little did he know that his future would change from that day forward. Under the stewardship of Kyoshi Jack McPeek, Jeff would become part of the WSKF family through his training in karate. His life, as well as the existence of the WSKF, would be forever changed and greatly enriched. Jeff’s cousin, who was already training, invited Jeff to the dojo to watch a class. Kyoshi McPeek threw a gi at Jeff and told him the best way to get a feel for karate was to participate. It’s been reported, Kyoshi Leistner once stated, back then he was so busy that if Sensei McPeek hadn’t thrown a gi at him and encouraged him to train, he might not have returned to the dojo. Jack said, “It seemed as if there was a sense of familiarity, as if Jeff already belonged to the dojo. So, it seemed only natural to get him onto the deck.”


This year is Kyoshi Leistner’s 40th Year Anniversary in karate. Kyoshi McPeek states, “For me it’s been a real treat and honor seeing Jeff’s growth from student, to sensei and dojo owner, and to one of our top WSKF leaders. Jeff’s deep work ethic and desire to produce and be the best he can be, are the same on and off the deck. Jeff’s karate skills are among the best I’ve seen in the world. His movements and techniques demonstrate insight and deep understanding beyond most advanced karate practitioners. Jeff’s long list of black belts and advanced students, all accomplished in their own right, speak volumes about his teaching capabilities.”

Kyoshi Jeff Leistner’s karate school had its beginning in his home. Jeff’s knack for teaching the art and science of karate enabled him to open his first commercial dojo in Troy, Ohio in 1982. It continued to grow from there to the large dojo he and his wife now own which is nestled among the cornfields out in the country of his Troy, Ohio property. Jeff’s karate skills, persistence, and vision, along with many helpful people, such as his wife, Chris Leistner, helped him to make this dream come true. Jeff met Chris on a WSKF training trip in New York. Chris was a student of Hanshi Grant’s at that time. Eventually, Chris and Jeff married and became a winning team. Together they have created one of the largest and most successful dojos of the WSKF.

Kyoshi Leistner’s success is rooted in his thirst for knowledge which compels him to go beyond the surface of the craft of karate to dig deeper and extract the essence of every technique. Kyoshi is able to then take this knowledge and put it into lay-mans terms so that even the beginner student can learn techniques as they were meant to be performed. Kyoshi’s success also stems from his dedication to karate-do and his consistent training.

"Years ago when I first met and trained with Kyoshi Leistner, I felt his intense energy, commitment, and presence. I knew that was the beginning of a path that would lead to the unfolding of one of the brightest flames that would burn on the path of Shorin-Ryu Karate-Do." Kyoshi Tommie Harris.

Kyoshi Leistner was able to travel to Okinawa with Hanshi Grant and the largest contingent of WSKF members, over 90, to train with the Master and celebrate the Master’s 85th birthday. While in Okinawa, Kyoshi Leistner tested and was promoted to the rank of Go-Dan along with fellow WSKF students, Glenda Olin and Tod Bassett.

Sensei Lori McPeek states that she remembers the early training days with Kyoshi Leistner. “He was always willing to help others. His patience and encouragement helped me to take many of my karate techniques to the next level. Jeff has a knack for breaking down a hard technique and making it easier to learn.”

“As busy people go, there probably is not a busier person I know than Jeff,” says Hanshi Grant when talking about Kyoshi Jeff Leistner. Hanshi further says, “I recognized some exceptional traits in Jeff back in the 90’s. I saw in him a natural leader, a caring individual, and a person that never seemed to quit no matter what obstacles were thrown at him. Jeff has held various offices within the WSKF Federation. It was his performance along with those traits that I observed, as well as my vision for where I wanted to take the WSKF, that I realized it was time to expand and name my first successor as president, Jeff. That was in 2004 and since that day I have had no regrets in my choice. “

Kyoshi Jeff Leistner has been voted into the BUDO HALL of HONOR, not only for his expertise in Martial Arts, his compassion for fellow students, and his dedication and 40 years training and teaching, but also for his many years of service and leadership given to the WSKF. For the past 10 years Jeff has served as the President of the WSKF, requiring countless personal sacrifices of time, travel and difficult decision-making. The WSKF is bigger, stronger and better today because of Jeff’s contributions, dedication and involvement. Jeff was awarded the rank of 8th Dan on August 1, 2009.

Kyoshi Jeff Leistner lives in Troy, Ohio with his wife Christine. Together they own and operate the Okinawa Shorin-Ryu Karate Dojo. Jeff has three grown children and three grandchildren. Jeff works full time as the Maintenance Manager at Veolia Environmental Services.